What I have learned in the past 48 hours thanks to ‘The Beast from the East’. 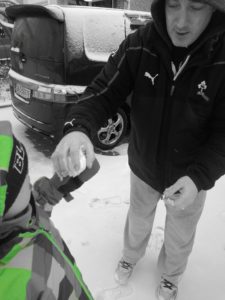 I must take RTE a little more seriously and not presume that they are all a bunch of snowflakes afraid of a bit of snow ; sure as Guinness proudly says every single Christmas “Even at the home of the black stuff, they dream of the white stuff ”. And it’s true, every single year , I hope it’s a white Christmas …I have never hoped for a white Paddy’s Day, but never say never and all that jazz.

RTE did not lie. I am sorry for calling you all snowflakes. ‘Twas only when school closed and the respite center and hubby couldn’t make it to work , did I begin to pay any heed to you lot in RTE, again, I apologise.

Snow is so so pretty…until it stops absolutely any and all previous plans made – even a hot shower became a battle of wills ; nope not between me and the kids but between me and the cold. I am also finding a new level of gratefulness for that annoying loud heater fan thingy in our bathroom; did you know if you leave it on and ignore the noise , it heats up the bathroom just enough for you to have the quickest shower of your life?

I love my kids. I love listening to “Can we go back out mammy after …this…breakfast…lunch… dinner… tea …before bed” , quickly followed by “You’re so mean. You don’t ever let us have fun” on a loop for now, 30 hours, but who’s counting ? (I AM) 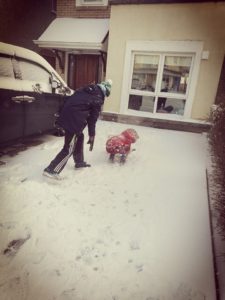 All those parents who live in countries where snowfall does not halt your country to a standstill – I appreciate how bloody long it takes to get wrapped up efficiently and effectively in a dignified manner – I applaud you folks. ( I am so sweaty by the time we are all ready to go out, I no longer need gloves or a hat or even a coat – consider a quick YouTube on “How to get your kids out in the snow without running around after them offering a sock for their hands , ‘cos you’ve no clue where any gloves are , while they jump up and down threatening each other about yellow snow“ tutorial for us island folks , I’d appreciate that – also feel free to change the title of video.

I do not own snow gear , neither do my kids nor my hubby but our dog has a fine snow jacket – my priorities need looking at .

Teachers are not paid enough. I can’t be listening to all that arguing over who touched who’s food and who breathed on who … can you imagine a classroom of that crap ?!

These unexpected cooped up days have given me more and more appreciation for my dads saying “‘Twas myself and the dog here and not a bad word said between us” – Daddy, I am sorry for mocking you for years for that one – I get it now – totally.

I have learned that Summer holidays are nowhere near as bad as being snowed in – I will (try, try, try ) not complain this Summer.

My kids would fight over a fart.

Bread is an important commodity to have during a snowstorm, as is milk, butter, coal, internet, earphones , wine …How did they cope back in 1982?!

Netflix is one of the best inventions / creations , EVER.

No matter how long my kiddies were out in the snow ; it was never long enough, frozen snot and red eyes were in no way connect to how cold they were. Apparently.

I think if I came back as dog, it wouldn’t be so bad …she has her own private bed where no one else can fit or would want to go..win, win.

Building a snowman is not nearly as much fun or as ‘happy’ as it is in the movies .

Snow day is nicer and much more fun than snow dayssss and I gotta say, I kinda blame Hollywood.

I am contemplating taking a mortgage out for the Gas company, if possible?

Having a white dog go missing in a blanket of snow really tests your leg strength as you concentrate trying to gallop through the a few inches of snow, praying you don’t slip on that bit of ice hidden off the kerb of the footpath you didn’t see, all the while cursing yourself for getting not only a white dog but a bloody heedless one too. 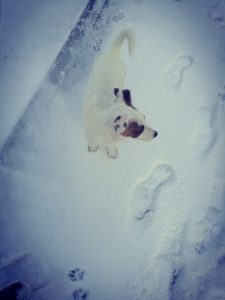 Slow cooker is the best cooker . I threw all sorts of stuff in there and didn’t even bother to check it until my phone beeped . Dinner for two days, done.

Yes our little island is now a blanket of snow and while I do complain ( a fair bit) I have to admit how fortunate we are to have a warm, safe, fully stocked home full of devilment, childish behaviours , fun and laughter despite being slowly driven mad, we have enjoyed our brush with Storm Emma mixed with the Beast from the East.

We’ve made some wonderful memories and I am pretty sure when they are back at school and work , I will miss the company …sort of ! 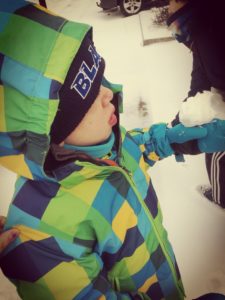 
The weather drove me mad last week! I want enough snow that everything stops and everyone can have a snow day, can’t believe I woke up to snow again yesterday morning 🙂 Sim x


Oh thanks for the laugh! As a teacher I can say that yep – those constant questions and requests DO get on your nerves – particularly with 28 asking the same thing…over and over. I love that your dog was the most prepared for the snow…ah, well.


haha i can so relate to this. Being snowed in definitely made me realise the summer holidays aren’t that bad x


So so true! Can really relate! Was quite content to slip & slide home from the school drop off on Mon morning


We also got snowed in here in Cardiff…. and amazingly had a white St David’s Day! We had to cancel my husband’s 40th birthday weekend away which was a real shame, but I must say I actually really enjoyed the slower pace of life caused by the snow.


Love it, intensely human and engaging.


We thankfully only had 2 days where my kids schools where closed. We went as far as the garden and that was it. Snow is lovely, it’s having to travel in it and when it melts and leaves black ice is where i have a problem!


The snow days were fab but am so glad life is back to normal now! That and the fact bread is readily available again! 🙂 I need to take out another mortgage for heating too! Sim x


I say hurrah for Netflix too when we have such a snow day! Especially when the school is closed and you have to put up , sorry! to enjoy some quality time with your little ones! LOL We played a bit in the snow but my little one was not that impressed and after 15 minutes he had enough. thank god for that! I am not a huge fan either!


I agree that snow looks very pretty and it is fun to play in but what annoys me is when the whole country breaks down because they have not prepared for it.


I am so done with the cold weather now and just wish spring would hurry up! We were snowed in for 4 days and i resorted to eating everything in sight out of boredom! lol


Haha!!! I am with you Ger!!! I enjoyed the snow… it was pretty until the kids played in it. Then I couldn’t wait for it to bugger off. 🙂


Nodded the whole way through. By biggest pet peeve was the constant having to wrap up, then their clothes inevitably got wet, so then a new outfit. Oh the cycle was endless.


I hate snow. Always have. It stops you getting anywhere and ruins plans!!!


My kids had been longing for snow for ages, but then it lost it’s appeal pretty quickly when they realised it is cold and wet. And with a 3 year old, we were restricted to going as far as he could walk, which is not very far, since you couldn’t get through the snow with the stroller. As my youngest declared, “I hate snow”.


Haha, I chuckled reading this and too you reminded me that I’ve been meaning to get a slow cooker for ages. Also agree that kids seem to have no concept of the cold. I wish I didn’t!


This made me laugh! I tend to avoid the snow, every years I’m either away on holiday or visiting another part of the country when it hits. I love how pretty it looks and the two minutes of fun building snowmen… but then I get cold and have to hibinate until it goes away.


This made me giggle! We were lucky (or unlucky if you ask my kids) that we didn’t get too much snow. The odd flurry but not much to get excited about!


Ahh this made me laugh, it’s funny how the snow hits and everyone goes crazy! We didn’t get much snow, I was glad but the kids were not!