We ended our magical trip on one hell of a high.

We gathered in the towns square, main street USA , waiting like everyone else for the Disney Parade.

A staff member spotted us , parted the crowd and placed us right in the front line.

“Best seats in the house for you Ethan” she patted his cap. 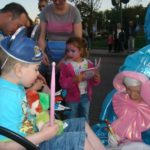 I did feel a pang of guilt as I heard families complain that we had taken their spot. I tried to pretend I didn’t hear them but it was proving difficult as a woman pushed me from behind and mumbled something in my ear. What she said I don’t know, but she knew what she was doing. I turned to her “Sorry” , I couldn’t think of anything else to say to her. I may not have spoken her native tongue but I figured she’d know the word ‘sorry’ , it turns out she knew that word and two more “F you” she almost spat as she pushed her way through us and onto the other side of the street.

Even in Disneyland there are bitches.

We stood while Ethan sat in his chair kicking and screaming to come out. “Wait buddy, few minutes” we wished this parade would bloody start. 10 minutes waiting with Ethan felt a lot like an hour.

Suddenly there was an announcement “ Ladies and Gentlemen , boys and girls the Disneyland parade is about to begin “ .

“Thanks be to feck” D sighed.

Ethan was now in full blown attack mode, anybody passing was getting a kick.

“Mickey Mouse Ethan” I bent down to his side, pointing at the characters.”Look!” I gasped, trying my best to distract him. I got a headbutt for my troubles. J on the other hand was jumping up and down begging to go up on D’s shoulders.

“You okay?” D gently rubbed my head. “Grand” I shrugged.

I felt eyes on me but decided to ignore them all. D grabbed J and placed the excited four year old on his broad shoulders, while Ethan seemed to be regulating himself.

I waited for them to finally start, moving Ethan’s chair if passerby’s got too close. 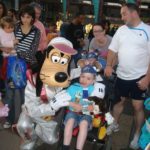 It was like a switch went on in Ethan, he leaped up,almost taking the chair with him “Mickey Mouse!!” he pointed as Mickey and co came towards us.

“This is the Disney Parade, Let me take you by the hand…” Mickey approached Ethan, I quickly helped him out of his chair as Mickey took his hand.

If I could freeze frame any moment in time~ that would have been it.

Minnie Mouse took D’s hand while J held on for dear life, I followed with the chair all blurry eyed. This was amazing. We were now part of the parade. We followed them through the square, Ethan’s hand in Mickey’s huge white gloved hand. He was jumping and singing, every chance Mickey got to pat him and hug him, he took it. What a great guy in that costume I thought as I watched my child gaze up at Mickey, hugging and kisses him over and over.

Mickey brought Ethan back to his chair, he lifted Ethan up and gently hugged him. Ethan was crying with laughter. He gentle placed Ethan into the chair but not before kissing me and giving me one hell of a squeeze. 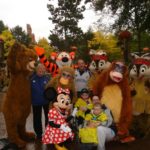 The crowd clapped and cheered as I struggled with my emotions.

The parade ended with all the crowd joining in. We were up there with the characters, walking with them and singing like we knew the words! Winnie the Pooh came running over to us , he patted a now exhausted Ethan handing him a balloon while he jumped up and down with J. The princess’s came over to us one by one, all beautiful, all generous with their wishes for Ethan and us. 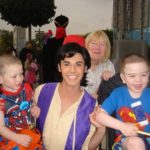 “Can we come back next week?” J asked as our taxi pulled up.

“I don’t think so little man, maybe a year or two” I smiled, knowing there was no way we could afford to ever come back here…

Yet two years later we would be back, with the ‘Share –A-Dream’ foundation. Ethan would go on to win an award ‘The National Children Of Courage Award’ his prize- to meet Santa in Disneyland Paris.