I love them dearly. But let’s get real. These past two weeks have been , not only for me but I suspect for them too, an absolutely struggle. While the idea of not having to make lunches or rush them out the door on time is , appealing , I’d rather do that seven days a week than have such long winded breaks from the beautiful routine that is school.
It always starts the same way. Every single break they have ( I am using the word break very loosely here ) , I start out all full of ‘plans’. Oh we can do this, we can go there and we can make this and make that. It’ll be grand. It’s never grand.
It’s usually ends up with me trying to keep my cool when out with them while they run, scream, shout, roar and use all that boisterous energy to keep going wild despite me bribing, blackmailing and threatening them minutes before we open the front door. I see other families, laughing and having a blast and I secretly wonder if they have mediated their kids or perhaps they are medicated themselves?
I just can’t seem to get the three boys to play. Just play. It’s bloody impossible. It works for 0.05 seconds then I hear – he hit him, that’s mine, tell him mammy, I’m telling mammy , mammy help I’m stuck, mammy he took it, mammy he broke it…
I used to love hearing ‘mammy’…
My toddler aka dictator broke chalk. Yes chalk which breaks so easily because I’ve bought so much of it lately that I refuse to buy branded chalk , so this breaks as soon as you take it out of the box. ( I do have the good branded stuff but I keep the branded chalk for when I want to play – yes I’m that kind of mammy! shhhh) He broke the chalk.

My 12 year old had what I can only describe as a pre-teen meltdown. He shouted, roared, and banned the dictator from touching the chalk ever, ever again. The dictator in retaliation drew all over the 12 year olds bike with the chalk he had broken and hidden behind the curtain. After he redesigned the bike he redesigned the window sill, the wall, the table and the floor. Now, I understood the need for the bike redesign but everything else ? What the heck did I do to him?

I had to calm the 12 year old down first and introduce him to a little thing called perspective . In those moments while he argued as to why he now hated the dictator , I could see his ADHD really coming through. I felt sorry for the kid. So I gave him the branded chalk and I cleaned his bike, in the hopes of preventing another meltdown.
I gave the dictator a cloth and spray (only water in it – last time I gave him real spray he tried to spray Ethan’s eyes) and showed him how to clean the window sill, the floor and the walls oh and the table ( chalk is brilliant , it comes off almost everything — it won’t come off curtains, fabric chairs ; but it comes off bikes ) I knew I’d have to re clean everything, but this was one way to keep him busy and out of the way, and it gave him a good sense of responsibility; at least that’s what I told myself.
He was happily cleaning when I heard a bang. Ethan had thrown the arm of the borrowed sample chair across the room and dented the wall.
The arm came off easily enough so I decided he didn’t actually break it.( seriously he didn’t, the arm was loose , D informed me later that night ) He broke the wall. There’s a kind of hole in it now.

He laughed when I said without thinking , “what the fuck did you do?” I laughed then, sure it’s only a wall. While I tried to see if I could do anything with the wall , the alarm in the kitchen went off. I now had spuds with no water left burning on the hob. The 12 year old appeared and informed me that he would like to divorce his younger brother because he drew on his bike.

How did he find out ? I pondered ,for a second. Then the answer appeared in the form of a two foot nothing filthy dirty child ,standing with chalk all over his clothes , face hands and hair. “Mammy ! You cleaned J’s bike. I did it again ‘cos he was meaned to me and brokeded my heart” Why are your kids the ones that rat you out? Mine do it all the time to me!

And so began another meltdown. This time I was been accused of taking sides.
By 4pm, I was done. And so was the ‘dinner’, instead fish fingers and waffles were thrown in the oven in the hopes that I wouldn’t burn them too. I had had enough.
I began to wonder what would happen if I just left . Seriously ? I took a deep breath, realising I couldn’t and wouldn’t just leave ,so I began to copy them. Everything they said , I repeated.

Ethan found this hilarious. J eventually laughed as he watched Ethan engage with me. The dictator was the hardest one to crack. But once you have two laughing the the third eventually joins in.

We went for a lovely walk then, by lovely I mean , quiet.
I gave them chalk to run ahead of Ethan and I , so they could have a surprise picture ready for us by the time we got to the park. It worked. But a fight did break out when I rolled over a few sticks of chalk left to the side of the path. That evening they all had a wash which ended in me sweating, ducking, diving, soaking wet and exhausted. By 8pm two of them were in bed while the third was watching ‘Ghostbusters’ for the millionth time.
Is it just me or is this common guys? Seriously, why can’t they just get along ? Why am I forced to be a referee , a negotiator and a bloody warden? As my daddy used to say whenever we broke something as kids ; Ye’d break steel .I think my kids could, I really think they could break steel, if they’d only work together! I could not wait for today. 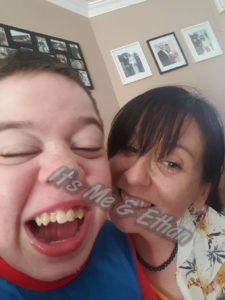 It’s like waiting for Christmas morning; I was so excited I got up even earlier, got Ethan sorted and relaxed before his bus, got the dictator ready to go to preschool while D takes the middle one to school – then silence .

Just me and a hot coffee.

Just me and my writing.

Or just me and Netflix.

I could not wait.

Checking my appointments for next week, my little ‘break’ won’t last long, we are headed to Dublin on Friday for a heart check up and a dentist visit. I’ve six more appointments in May , but for now, I am going to focus on Monday, this Mammys fundayTo all parents everywhere ; I know you love your darlings , we all do, but Monday is here and I hope you enjoyed your three hours of free time!
Yippeeee .