This is a little story which makes me laugh every single time I re-tell it. My husband has only recently found it amusing but still squirms when I make a joke about it.
I have asked his permission to share with you guys one of my husbands hilarious parenting fails; on the condition that I share one of my many parenting fails too.

The Christmas pageant
We bundled ourselves into the overpacked school hall. Our middle guy J was getting ready to take to the stage to sing his little five year old heart out. My husband had taken the afternoon off work so he could finally see one of our boys nativity plays. He missed Ethan’s due to work and back then we were sure we would only have the two kids …
In my husbands eyes this was the last chance saloon.

He had purchased a second hand video camera and had it to hand as the lights dimmed and the children filled the stage.

When “Silent Night” began , you could hear the chorus of ooze and aahs seep throughout the hall.
We were, for that moment in time , all united by the pride we felt in watching our littlest ones sing their tiny hearts out. It was beautiful.

D, my darling husband, had the camera pointed at the stage. He proudly turned to me and informed that the ‘zoom’ was amazing. He flipped the screen to prove to me how amazing it was. I nodded as I looked at the screen.

“Why” I whispered. “Why are you zooming in on that kid though?” I genuinely had no clue, “Just to show me the zoom is it?” I answered after I saw his confused look.
“Huh?” He whispered back to me ,as he pointed the camera at the stage again.
“Never mind” I whispered again, trying my best not to acknowledge the ‘shhing’ going on behind me.
J was, as every single parent of every single five year old believes, brilliant. He gave it his all. Bless him. He hasn’t a note in his head but at five years old that really never matters. We were beaming with pride as he came running down to us after the play ended.
As we drove home I took out the video camera just to have a quick look at D’s handy work.

He had a brilliant shot of all the kids up on stage, singing. Then he used the zoom button, to focus in on who I could only have guessed at the time, the kid he thought was our son.
“Am, D, honey.” I tried hard not to laugh. “Great job but I do have a question” a laugh erupted from my mouth. “Is it that bad” he laughed.
“No..no it’s great. I just want to know who the kid is in the video “ I laughed, right from my belly. “Huh? Wha?” He glanced at me, looking for a place to pull over and took the camera.
“Oh Jesus…” he laughed.

Yep, my darling husband had the camera focused in on a child who was not his child…but our little J is to the left of this kid and every now and then he makes an appearance as D slowly pans out!

This is one of D’s favourite stories to tell. And one of the most embarrassing parent fails of all my parent fails. 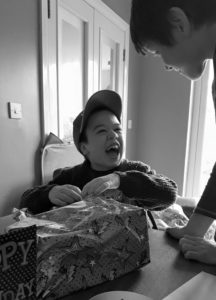 It was again Christmas time. D and I had been seeing each other for about six months. I had just received my Christmas pay cheque and was excited about how I was going to make Christmas extra special now that I had D to share it with Ethan and I.

To say my mind was on my money would be a fair and accurate description.

D met me and we decided to walk over to his shared house for a spot of lunch.
I had hung my handbag off the handle of Ethan’s stroller, like every single parent I have ever seen do.
We were walking along discussing our plans when my phone rang.

My phone was in my pocket. So I went to answer it, one hand on the phone the other on the stroller, when a gust of wind came and blew my very thick, very long hair across my face , I continued to talk on the phone ( it was the public health nurse, I can recall that because I was waiting for her to ring me back regarding Ethan and I really did not like her) while using my other hand to sweep my hair out of my mouth, eyes and face.
I let go of the stroller.

That ain’t the worst part.

I had stopped on a slope to fight my hair and the wind. Suddenly Ethan went speeding off down the path. D quickly ran. Me? The ‘ I don’t know how you do it’ mammy.

I yelled for all to hear–“My bag. Oh my god my bag”

D had one hand on the stroller when I noticed what I had said, he was bent over laughing . In between breaths he was telling Ethan “ah you’re more than a bag, never mind that mammy of yours”

That was almost 14 years ago and I can tell you I have never called my darling son or any of my darling sons ‘my bag’ since.
Parenting fails are , in my opinion a must. We all can’t and don’t get it right. We try. Each time we fail, we try again to do better.
But we must laugh too! Some of our fails are bloody funny .

Let’s remember these fails are not about hurting our kids or loving them less, they are proof that we are flawed humans doing our best.
My Husband now knows which kid is his when he records school plays and I know never to leave my handbag on a stroller …I am kidding …I now know how to use the breaks

I could literally write a book on my parenting fails , could you?