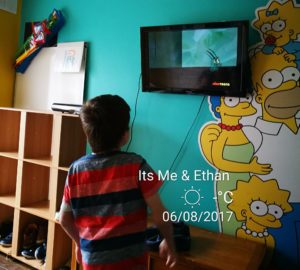 Out with the new and in with the old.

It’s the other way around for most people but we are not most people.

In the last quarter of 2016, we spent quite a few nights in hospital with Ethan.

It happened quickly and out of the blue, for us.

Not so out of the blue; as doctors and specialists had pointed out to us at the time (over and over) – “Hunter Syndrome is terminal and can progress differently in all children who have it, the only thing that is the same is the fact that it is a terminal condition. We are so sorry”

I can tell you; when doctors and specialist are telling you that they are so ‘sorry’; you still can’t quite believe that your son is terminally ill. Yep, even that far down the rabbit hole you still cling to hope.

Like many parents who face that kind of reality, we decided to disagree with the doctors and fight them at every step. They wanted to sedate Ethan. We refused.

They wanted to take away all medications, as these were obviously not helping, we wanted to try milder medications and sadly, we did agree with the idea of a peg to feed Ethan, as Ethan had lost too much weight and was finding it difficult to eat.

There were no shouting matches with doctors; everything we suggested they tried.

They however, always gave us that gentle reminder that Ethan has a terminal condition which will end his life during his teens.

Doctors have to keep you in touch with reality while trying to help you cope too. We are forever grateful to all members of Ethan’s team, especially over those long, hard months.

It was only when we would repeat these conversations to family or close friends that we would see their reactions that we began to realise that we were numb to what the doctors were saying or deluded or in denial, whatever word our family, friends and doctors really thought about us, at that time.

We were never fully sure which we were so we decided that we were numb, it sounded better than being in denial.

Eventually our boy came back to us, not completely but mostly.

We did have to accept that Ethan would never be the same; that Hunter Syndrome had taken some things from him which he could never get back. 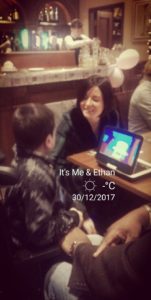 But the reality of Hunter Syndrome is exactly that; it takes and takes changing our kiddies each and every moment that they are alive.

We are well used to finding a new ‘normal’ with Ethan.

We just never had to find our way through such a rapid, spiraling new ‘normal’ before this.

Ethan has always been declining but much slower and only in a way that you’d notice if you hadn’t seen him in a few years.

This decline took the floorboards from under us, not just the carpet.

I say accept it but the truth is we can’t ever accept it, we just move with it. For example, Ethan is now linked in to a hospice.

That shattered our hearts but we do think it is something our family needs the support of.

In the second quarter of 2017, Ethan began to take medication we felt he would benefit from …and so our boy came back, little by little, bit by bit.

He went from not eating to only needing his peg for medication.

He went from not communicating to talking, laughing, playing and engaging with us.

He went from violent meltdowns to one meltdown maybe once or twice a week, with zero violence.

Despite me saying we had argued with the doctors, without their support for us and Ethan, we would never have Ethan as he is today.

We began to give Ethan ‘Charlotte’s web oil’ in April 2017. The changes were subtle at first, we were even afraid that we were imagining them.

He was indeed stabilising and happy once again.

With a condition like Hunter Syndrome, having your child stable is a huge thing.

Our boy started to come back to us, with little bits of speech coming back to him, his love of jigsaws, TV, music and his affection for us returned by December 2017.

January 2018 and I really hope it is for Ethan; in with the old and out with anything new regarding Hunter Syndrome.

I want Ethan to stay the same, even though I know that’s not realistic, I can still hope after all hope is what got us through last year.

Hunter Syndrome showed us the speed it can amp things up at last year…but it also made us enjoy our Summer, take longer days out with all our boys, it made our Christmas very special, it showed us once again how precious time is…

We hope this year it continues to show our boy some mercy so we can enjoy him for that bit longer. 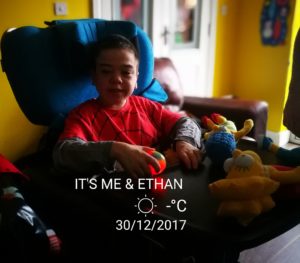 What’s your in with the old and out with the new for this New Year?


I can’t even begin the imagine what you are going through. It is amazing that Ethan is starting to find part of himself again and that you have a good support network in place. Sending you love xx


Ahh I so hope that Ethan continues as his old self this year, it must be terrifying for you all waiting for anything new to happen. I want to keep my little ones small for as long as possible this year, my baby starts school in September and Im dreading it!


I’m so glad he’s starting to communicate again with you. You must have had such a rollercoaster year, so I’m definitely with you with out with new and in with the old. Hoping you see a lot more progress this year x


I’m so glad you’ve started to see parts of Ethan coming back to you. Being able to communicate with him again must be a real positive. I hope 2018 continues to get better and better x


I can’t even begin to imagine what you’re going through, you’re a rock! So happy to hear that Ethan is starting to regain himself a little at a time, I hope and pray he carries on improving throughout 2018 🙂