Have you ever bought a toy that did far more than it says on the box?

It was supposed to be a stocking filler, you know that last minute thing you buy because you think you’ve not bought quite enough for one child as opposed to the other children.

Kids, eh…they count presents and if the toddler has five, they kind of expect five too.

Kids won’t be kids for long, so yes, I try to ensure my boys have all the same amount of presents to open.

I bought it for my middle guy, J who is eleven.

I bought it because I thought it would be something that could help him build up his concentration level. J has ADHD.

I also bought it because it was ten euro and I figured it was great value.

It started St. Stephen’s night, he came down the stairs and asked me if I’d like to have a turn at his new game.

My answer would determine what I would be doing over the next three weeks of the never ending Christmas holiday.

Every spare minute I had, I had to figure the game out. I had to.

I have no idea what came over me but I was not alone.

D, my darling husband had to have a turn once he came home from work. An unspoken competition between the pair of us began – Who would crack it first ?

When the game was left unaided (due to the lots of stuff one must do during the long days) the toddler (age three) would take it apart and make a house; which would catapult me into a panic of ‘count the pieces , don’t lose any for the love of the game, don’t lose any’ – I know, I know…I sound like a complete addict …perhaps that’s exactly what I was.

Ethan took a shine to it too, he has shown very little interest in anything lately so when he picked it up and began stacking it …I let him.

My addiction subsided and I watched and ducked as he played, chewed and threw pieces of it all over the room.

I am no saint; I had J picking up the pieces and counting them each time Ethan threw some.

For something that was bought on a whim and as a stocking filler, it was really giving us some good quality family time as we’d sit around the table taking turns, trying to solve it. And I have to say, it was nice to see J with it instead of a being hooked up to a computer screen playing a game . 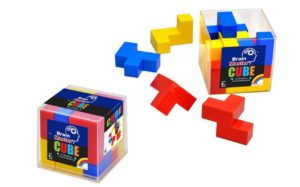 It did remind me of my own childhood and the fun / competition board games brought to our family of nine.

So the game- well it is so simple, you are bound to laugh at me and that’s ok- I bloody needed a distraction and here it was in all its plastic glory.

It’s called Cube and all you have to do is use the 13 pieces to make a cube, simple? No, no it isn’t.

According to the box there are 19,186 solutions and it’s for ages 8 and up, I know I should be embarrassed but I’m not, I can’t even find one solution!

J hasn’t solved it; but it has kept him interested, competitive and even helped create a little J and mammy time, which is something we both benefit from.

My parents haven’t solved it.

My brothers and sisters haven’t solved it.

Our friends haven’t solved it …my point is, it isn’t just me who can’t solve it!

So if you’re looking for something for all the family and I mean all the family, a ten euro toy called Cube comes highly recommended from me and my family – it’s still unsolved and we are still trying hard to solve it.

I just need to find one.

This was originally published on FireflyFriends