It was a Monday in March and this day was the first day in months I’d been out with all my three boys.
It felt a like a little victory.
There’s nothing like your ‘new normal’ to help keep you focusing on the little things in life, eh?

It had been raining for days prior and going out wasn’t an option.

For months pervious going out alone with my boys wasn’t an option regardless of the weather, but that Monday in March, I had an option and I packed Ethan into his chair, threw runners on the toddler while reminding him as gently as one can through gritted teeth; not to run off. My middle guy was busy organising himself and his bike.
We hadn’t left together like this because of the violent meltdowns Ethan had been suffering from ever since October.

But this Monday felt like it belonged to us.

Ethan had been much calmer over the past few weeks. He was having less and less meltdowns and he was happier.
This Monday, I decided I’d try and do this, I pushed my anxiousness to one side, my urge to ring my dear friend A subsided as we opened the door and left our house, just the four of us.
J, rode his bike beside us, while the toddler sang as I pushed Ethan’s chair.

The further we walked, the more relaxed I became.
Of course, when you relax, you let your guard down.
I decided that it was a good time to let Ethan out and walk a little. Ethan was delighted with this. 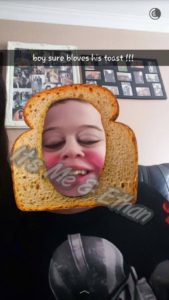 Over the last few months, Ethan’s abilities have been slowing down. It’s been hard to watch and that is putting it mildly, but what Hunter Syndrome has taught us is that you’ve no choice but to try and accept your ‘new normal’. And we’ve been trying really hard to do that.

There’s no accepting it but we have to learn to live with it; sadly we don’t get a choice. That’s what we accept.

I let Ethan out and I don’t really know what I expected.

He used to hold my hand. He used to know that he had to hold onto the chair or my hand. Instead, he pushed passed me and ran off. I gave chase.
My heart was pounding, beads of sweat dripped from my forehead while my mind screamed you bloody twat Ger.

“J and D stay there with the chair” I roared over my shoulder, hoping that the toddler wouldn’t see this as a game.

I caught up to Ethan in less than a minute.
Yep, he is losing his ability to walk and run but Ethan doesn’t know this, so when he gets the urge to run, he does it despite him wobbling from side to side, tripping and almost falling.

It’s an absolute nightmare, he needs and wants to run but I’ve to restrict him. And yes, I feel awful having to stop him. I love that he can still run; but my heart is always up in my throat when he bolts.

I held Ethan’s hand . He pulled away. He kicked my leg. Oh please, please let this not blown up.
I could see a family coming towards us with young children.

They were the perfect height for Ethan, easy pickings for him. I panicked. I knew he wanted to sit , I knew J couldn’t manage his bike and the chair, and I knew the toddler was about to give me another workout as I could hear J threatening and bribing him all in the one breath.

I bent down and picked my almost 15 year old up. He has been putting on weight but even at 5 stone he was impossible to pick up.

“FUG WAY” He roared at me, while he wriggled free. I was shocked.
He hadn’t told anyone to ‘fug way’ in months. I smiled as I could feel my emotions bubbling. I quickly thought of another way to get him to sit.

“Ethan sit” I patted my knee while I bent down.

He was very calm but very adamant that he was not moving.

His easy prey were getting closer.

He sat on my knee.
The family smiled as they passed.
Ethan bolted again.
This time across the road and straight into an unlocked car. He sat down on the driver’s seat.

“Oh shit. No come on buddy, out ya get” I offered my hand while glancing inside to check that the keys weren’t there.
He took my hand as J dragged a screaming toddler and pushed Ethan’s chair to the corner.
I pointed at his chair.
“Ethan sit”

He took my hand, I shut the car door and saw that we had a mini audience. I have no idea if it was the owner or not but I didn’t care, I was just glad no damage was done and thus far, we still had no meltdown.

We walked over to J and a now temper tantruming shitfit of a toddler.

I ignored the toddler.

“I’vva a good idea” Ethan laughed and placed his butt in his chair, he waited for me to buckle him in, which I did promptly.
“What did he just say!” J’s voice almost shrieked.
I laughed. J laughed and Ethan laughed.
“He said he has a good idea” my eyes began to sting.
“Yes you do Ethie” J ruffled his hair.
“Leg me alone” Ethan snapped at him.
“Wow” I said as J stood in disbelief.
“Wow mam, are you hearing all this?”
“ I am “ I smiled while listening to Ethan now laugh at his brothers, especially at the tantruming one!
“What ‘bout me ? You’re not hearing me!” The toddler piped up. “Oh I can hear you, but until you stop screeching , I won’t listen to you” I rubbed his head.

He thought for a moment, “Fair enough” he held onto the chair, “Let’s move incase Ethan gets angry”
It’s crappy that the toddler know this fact, but that doesn’t make it any less of a fact.

“Get your bike J”
I began to push Ethan.
We strolled home while Ethan laughed at J who was cycling back and forth entertaining both his brothers and I.

It wasn’t exactly a stress free walk, but it was a walk, something I hadn’t done in months but something I’ve been able to do more of these past few weeks and for that, simple as all as it sounds; I am very thankful for.