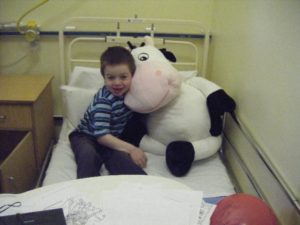 I thought I’d share it with you all; as perhaps to remind us all that even in our darkest  hour there is sunshine.

We sat in the corridor.

My eyes were stinging , I was trying to control my breathing before stepping out into the ‘real’ world again.

D was quietly following Ethan up and down the narrow corridor.

Ethan was being an airplane and was annoyed that the corridor was too narrow for him to fully extended his wings (his arms).

I nodded as I took out a fresh tissue from my pocket. Dabbing my eyes , I took a deep breath and stood up.

“Let’s go mammy” Ethan smiled up at me.

I sighed. And slowly followed Ethan and D down the lonely small corridor of St.Bridgets ward and out into the Dublin summer night.

We loaded the car. We had spent three days in St.Bridget’s ward. Ethan had undergone every possible test you can think of in order for his metabolic team to get a ‘baseline’ as to where he actually was with this syndrome that stole young kids from their families.

We had ended our stay hearing the words “Ethan is very old to be just diagnosed, he is six, it will be a fight and a half to get him treatment” ( The only treatment for hunter syndrome is enzyme replacement therapy (Ert) , and the specialist wasn’t sure the government body would give us the drug which would help slow down the progression of the syndrome. The specialist was amazing and told us to go home and prepare for a fight with our government , a fight he was sure we would win)

I sat in the car as we began the long journey home to Galway, this was before the motorway was completed , so trust me when I tell you it was long, extra long on this particular day.

There was nothing left to say. We had fought for Ethan since he was 18 months old, we had fought for services, fought for a diagnosis, fought for the correct school and now we would fight for his right to have the same treatment as those who were diagnosed much younger than him.

“We will win” D blurted out as I stared out through the window watching the streets of Dublin coming to life as the sun began to set.

I knew we would get ERT for Ethan simply because of all the previous years of fighting we had done. It was all documented, it was all on file– my files, the Ombudsman’s file, Inclusion Ireland’s file and on the HSE file.

“It’s the length of time this will take , which frightens me “ I began to cry.

Suddenly Ethan appeared , his little fingers on my shoulders.

D began to look for a safe place to pull over.

“Oh Ethie, no taking seatbelt off ” I held his little hands, as the car slowed down to a stop.

“Ah mammy. I love you. No crying. Please” he planted a wet sloppy kiss on my cheek.

“You’re such a good boy Ethie. I love you so much “ I tried to smile as my head filled with fights, paperwork and more fights. 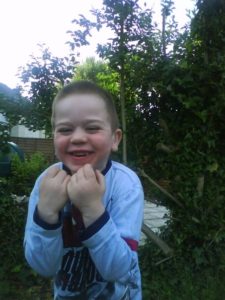 “Back into the seat Houdini” D laughed as Ethan began slapping my head calling me a “Silly, Billy Mammy”

I turned to double check that  he had belted himself in correctly.

I laughed so much that I found it hard to breath. It felt good to laugh this hard. I needed it more than I needed the tears and heartbreak . (I knew my laughter didn’t match what I had seen; but I needed to laugh and Ethan helped me do that- it is good to laugh ...)

D quickly turned around to see what had me in hysterics .

There he was, his arms folded across his chest, the seat belt was fasted alright, but fasted to his teddy who was holding his colouring book, his bag and his clothes.

“Go daddy” Ethan laughed as he heard the two of us laughing .

“Notice how the feckin’ snacks aren’t entrusted to teddy, eh?” D nudged me to look back again at Ethan and co.

He had the snacks sitting neatly on his book which was on his lap.

“Ethie the seatbelt is for you buddy, not for teddy “ I leaned back to unclip the belt and put it across Ethan.

“Fine. Look clip this in there” I showed him the other buckle and the place to clip it, which he did perfectly.

“Now , Houdini and teddy all buckled in” D laughed.

“Sorry, Ethan, I meant to say Ethan” D pulled the car out into the traffic once more.

“You know, if you ever do write about Ethie , maybe that’s the title right there; It’s Me Ethan or It us and Ethan …what ya reckon “ D teased as Ethan sang and laughed the whole way back to Galway.

Six months after Ethan was diagnosed he received his first ever ERT treatment in St Bridget’s ward, Temple street hospital as ‘Batman’ stood beaming with pride.
*Batman was Ethan’s metabolic specialist at the time . He treated Ethan as if he were his son, and for that , we are eternally grateful .Batman , you made the very early days, much much easier— thank you .


Lovely, I volunteer in Temple street once a week, can totally relate to this post


A great place to volunteer ! Thank you so much for reading x