There’s a time and place for most things.

There is no time and a place for memories; sometimes they just flood your mind when you least expect it.

They come when we don’t want them and they refuse to show up when we try hard to summon them, eh?

I live in a world where memories especially good ones can cause me to spiral into a world of anxiety, panic, fear…; I have memories of my son, who is still very much with me but my memories involve a different child; it almost feels like I am remembering a movie rather than my son and I many years ago.

Today a bright funny memory came rushing into my mind as I placed my four-year old’s bottom on the step of the stairs.

I, for a long time have pushed these wonderful memories of my son out of my mind as they are painful but yet they are so wonderful.

I am currently doing a mindfulness course; and I am learning to sit with the memories of a boy that is no longer here but yet very much here.

It is a balancing act. I believe it’s been written about many, many times – how do you grieve a child that is still here? – I don’t think you can.

I think you just learn to be with them and recall memories which in time will bring happiness to you.

Mindfulness has helped me do this; don’t get me wrong, it’s been really difficult and still is, but I am trying hard to recall the wonderful memories I spent years blocking out.

I placed my four-year-old on the last step of the stairs for crimes against my windowsill (again).

He sat quietly while I told him off.

He once again tried to explain that the markers did it and that it was just his hand holding the marker, so therefore it wasn’t all his fault.

I left him there.

I smiled as I sat on the arm of the chair. He is a funny little man I thought then it came flooding back.

I could feel the hurt and my heart beat faster but I choose to feel it and let that memory come in. 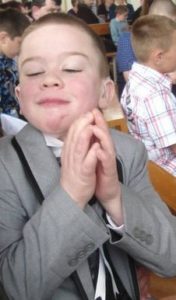 “What did you just do to your brother?” I was shocked at the state of my then one year old. He was covered in sudocream and marker. He began to cry as he mashed the sudocream into his hair.

I had no idea how to clean him.

“Nothing” came the reply from my then three and half year old.

“Don’t you lie to me, Ethan!” I pointed my index finger at him while he looked at the floor.

From behind his back, he pulled out the empty sudocream tub. Slowly he handed it to me. Then without a word he walked out to the stairs and sat on the step.

I followed. I did find it funny that the poor kid was so used to getting into trouble that he knew exactly what was going to happen.

Of course, if I had known then what I know now, I would have probably brought him his own sudocream and let him destroy a doll or two.

“You’ll stay there for…”

He cut me off …” I know minutes. I am so so sworry mammy. I weally am, this time. Here”

He pulled out a black marker from his pocket.

I took the marker and told him “Three minutes Ethan. That was really naughty”

It’s not easy to clean sudocream off a wriggling one year old, but I did it. 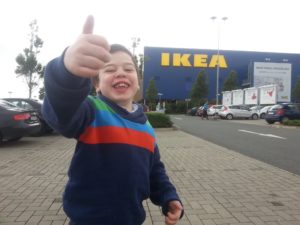 That very same day, Ethan and his brother were playing with cars when I caught Ethan with a car up in the air, poised and aimed at his little brother’s head.

“If you throw that Ethan, you will get in big trouble” I warned him.

He looked at me, then at his brother and back at me.

He let the car down. I really thought that we had a breakthrough with this consequence for actions dance w head been doing for years, when he picked up a juplo Lego brick instead and threw it straight at his brother’s head while laughing.

He turned to me and said “I know, I know, stairs ….” And he placed his three-and-a-half-year-old bottom on the last step of the stairs.

“Is my time up mammy?” My current four-year-old brought me back to the present.

I wiped my eyes, I smiled.

“It is, little man, come here and I tell you a story about how funny your big brother Ethan was at your age”.

Memories are beautiful and learning to embrace them is hard work but work I am willing to do.


I hope these memories are going to keep coming back to you, may they help you through the difficult days and make the good days better. That Ethan is such a character and I think that young one of yours is just like him. 3 precious boys who you write of with so much love.