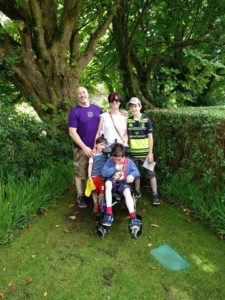 I could feel the blood rushing to my head. I knew I was the center of attention, the main attraction, the one that would help speed up the waiting time.

I pulled his pants up. He roared at me. He bit down hard on his own chubby thumb. I tried to calm him. “Shh, shhh it’s ok buddy” I stretched my arms around him.

He flung his head back hitting me right on the bridge of my nose. My eyes watered as I let him go. He ran. I gave chase.

I could hear the ‘tutts’.

“No, no buddy” I tried to sound like I was in control. I obviously was not in control but neither was he. He cried as I picked him up.

I sat beside a big man, whom I thought could take a punch if my son were to continue with his meltdown.

“Shhh…shhh” I gently rocked him on my lap. I could feel my heartbeat stabilise as he grew quiet. “Shh…shhh” I whispered in his ear.

“Mammy here, mammys got you” I kissed his head. He sat still whimpering on my chest. “You’re a good boy, I love you” I reassured him.

“A good boy!” Her voice rang in my ears. She rolled her eyes as I looked at her.

I took a deep breath. I could feel him beginning to move. I had nothing to keep him calm.

My phone had died, we were here for over an hour already, and he had done all the waiting he could do.

“Leg me go” he roared as his legs lifted up high into the air. I let him go. He ran. I followed, apologising to those he shoved out of his way.

The receptionist shook her head.

“Will we be waiting much longer?” I looked at her while holding the sleeve of his jacket.

“A little while yet” she answered while a bemused look ran across her face.

I sighed, berating myself for not having my phone fully charged.

“Excuse me” he tapped my shoulder while I struggled to hold my boy still.

“You can use my phone” he handed me his phone.

I looked at him in shock.

“I’ve it loaded up already. I could hear it was the Simpsons he was enjoying” he smiled at me.

I wanted to cry.

I wanted to let go of my boy and give this young boy a huge hug.

I wanted to show my audience that this, this was true human compassion and coming from such a young boy.

I swallowed hard. “Thank you” I whispered as I took his phone.

My son quickly calmed down as we both sat on the floor watching the Simpsons. He laughed and repeated “Homer” over and over.

I glanced around the room, trying to see who was with this young boy. My eyes fixed on his, I said as loud as I could for all to hear,

“Thank you so much, you’re a credit to yourself and your parents” he blushed while I immediately spotted his mammy, sitting four seats to his left beam with pride.

I smiled at her too.


This is such an engaging post. So sad to hear how people are not very accepting of your son and judge both him and you. So lovely the post turns around though and the story has a nice ending. There are some lovely kind strangers out there.


Aww! There is some kind people out there. It is a sad shame that not everyone can be as accepting as that boy! He’s a good one and you are right a credit to his parents x


Aww how sweet. As annoying as it is hearing a young kid cry and scream i n public places, I am sure it is just as bad for the parents. A bit of compassion and less judging goes a long way.


What an amazing act of kindness just goes to show there are still gems in this world!


awwww what a thoughtful and well brought up young man. That was the perfect way to help you out in that moment, what maturity to realise that. Good on you for thanking him as publicly as you could. Kate


Ahh this is so lovely. I love when the kindness of a stranger makes such an impact on someone in that way. Thank god for lovely people!


Oh, such a beautiful thing. Many people are far too quick to judge the younger generations. In my experience it’s the older generations who have little tolerance.


Thank you for sharing this heart warming story. A little act of kindness can go along way.