I have spent many years telling myself “ it’s the little things in life that matter ” .

I have stopped myself from picturing all my boys at certain ages, milestones and as future versions of themselves. I tell myself , often , to live in the present. I try my best to actually follow these simple yet somewhat difficult ‘rules’.

Recently, our eldest son Ethan has had a hard time ; between medication side effects, progression of his syndrome and having to stay in hospital for almost a week; we are finally now, finding our new ‘normal’. Our middle son J, is in the process of deciding on which secondary school he’d like to attend, (it’s nice to let him believe he gets the final decision!) while our youngest son, Dee, is getting ready to begin pre-school. It is all changing. Time is moving forward and we are forced to plan the future , to look into the future and choose the best fit for both our younger sons education.
Ethan is slowly making progress, we think. That’s the thing about Hunter Syndrome, because it’s so rare no doctor can tell us what exactly happened over this past month with Ethan. They simply don’t know. Ethan is finally eating again, he’s finally talking again and he’s finally screaming with delight at TV again…these are all things, even I, have taken for granted over the past years; despite knowing that Hunter Syndrome is a progressive condition. 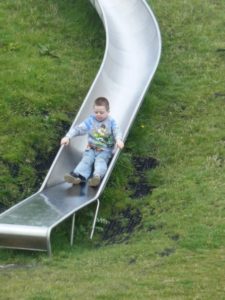 I find myself going down ‘memory lane’ more and more often these days; which I am told is completely ‘normal’. On one hand I am planning for the future; for my younger boys, while trying not to think of Ethan’s future in too much detail. On the other hand I am stuck in the past, remembering all the things Ethan could do and all the funny sh!te he has done and said.

It is the most bittersweet feeling in the world. I have re-learned how to take joy in the smallest of things.
Ethan wasn’t sleeping for a few weeks; which meant I wasn’t sleeping. Each night, he would sleep for 20 minutes , then get up and start kicking his bedroom door. I would try to get up each time before he’d begin his kicking, in order to ensure the rest of the boys ( D included , as he had work each morning) got a good enough night’s sleep. I would guide Ethan back into his bed and 20 minutes later, the cycle would repeat itself until it was a reasonable hour to go downstairs.

One night Ethan pulled on my fingers so hard that I fell onto his bed. Once I was down at his level, he stretched his arms around my neck and pulled me into him. I gently kissed his cheek. I lay there, my face beside his as his little curled hands began to pat my upper back. I sighed knowing this was going to be one of the longer nights.He pushed me off him and I stood up. He lifted his hand to mine and once again pulled me down. This kid wanted me to stay, that much I knew. I climbed into his bed , held his little chubby hands in mine and in the still of the night my baby fell fast asleep.
He is that- my baby. He will always be that – my baby. I lay there for two more hours listening to his breathing while his little hands still fidgeted with mine. It was in that moment; that I realised it is these little things that matter– and so for the next six nights I lay beside my fourteen year old son thinking how lucky I was to be the one lying here beside him, despite the lack of sleep we were both getting.

This week, we seem to have come to happy medium with sleep and Ethan is now sleeping up to ten hours a night; mainly thanks to medication and a homemade ‘safe’ bed! On the nights when sleep refuses to come to him; I lay beside him listening to his calm breathing and again I thank the ‘Gods’ for giving him to me, despite the heartbreak of his syndrome; he is mine and I am his. Forever.

For all families; life indeed changes and can change rather quickly. For us and our family; life changes, we adapt, we try to accept and we try to find a new ‘normal’ …and so far, I have to say we are doing well at it. We have always done well at it; but that doesn’t mean it’s easy. Ethan is happy again. J is getting ready for secondary school and Dee so going to preschool (I have a feeling that I will get to know Dee’s teachers quite well!) D is back at work and me…well, I am back writing …

Life moves pretty fast. If you don’t stop and look around once in awhile, you could miss it– Ferris Bueller’s Day Off.

It most certainly is the little things in life that matter .