Saint Patrick’s Day is fast approaching. Every year, well almost every year, I try to convince my darling husband that this year will be different. 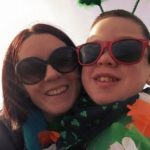 That’s where we differ- due to Ethan’s syndrome(Hunter Syndrome) being progressive, his needs increase as the years go by. I want to bring my three boys to see the parade in the city, like all parents do. I want them to enjoy a green ‘Supermac’ milkshake (it’s been so long since we’ve done it, I’m not even sure Supermacs still do these?!)
I just want some goddamn ‘normal/average’ family outing.

My husband the ever so rational thinker; reminds me every single year of the previous years we took to the town center on this our national holiday, celebrated internationally. He reminds me how quickly I forget- and it’s true; sometimes (A LOT) I am a devil for the ‘ol rose tinted glasses.

It was four years ago the last time we went to a parade, as a family. Ethan would have been 10, almost 11 and J would have just gone 7, the dictator wasn’t to grace us with his presence for another two years.

We headed into town an hour early to get parking, disabled parking to be exact. After 20 minutes or so we decided we’d just have to park anywhere we could find and hope we’d enough room to get Ethan’s adaptive buggy out without damaging any one else’s car or our own for that matter.

We made our way, slowly through the crowds with “excuse me’s” as we tried to push Ethan passed, looking for a good spot to lock the buggy in place. Ethan began kicking as the crowds were not moving fast enough; then the bands began and he went into a full blown meltdown.

If you think wheeling a baby or toddler in this kind of situation is tough; try wheeling a child who was having a sensory overload meltdown with people who were refusing to move because “We have been here for the last 10 minutes”– none of these people were parents! None had children with them, they were old enough to understand or have some inkling that this kid wasn’t like an ‘average’ kid.

At this point we were trying to make our way back to the car with J understandably getting more and more upset as the realisation that we were not going to see the wonderful colourful musical show ‘Mocnas’ had promised (and always delivered !)

Making our way back, once again people refused to move despite Ethan screaming, J crying, D sweating and me pleading with them to move. I actually had to tap parents shoulders to explain I was not trying to ‘steal’ their spot, that I was in fact just trying to get the f**k out of here.

Many refused to move I know that is shocking but it is true. Then there were the others. Some parents, some not–all adults. All moving so quickly and rubbing J’s head as he passed, while saying “I can push the little dude out here in the front, if ye want to try and stay” . Others tapped those ahead of them and ordered them to move to let us through. 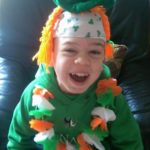 Small gestures like those, mean a lot when you’re stuck in a crowded street, with a disabled child who has zero understanding of what the heck was happening while another child is having a crying fit because you promised him he would see the parade.

I began to feel the usual horrible familiar feelings creep over me, my legs started to wobble, my vision began to blur and the sweat began to drip from my forehead as I felt the air become suddenly thin…

I grabbed J tighter and hit D’s back. D stopped, looked at me and repeated “I can see a gap up there, hang on please , please Ger, stay with me” and so I held on tight to the back of his jacket as Ethan kicked his way through the crowd with J being dragged along behind me.

And that is a non-rose tinted glasses version of a ‘typical’ Paddys day for us. “So now Ger are you sure you’d like to go into town this Thursday with the dictator added into all that ‘fun’ we had last time?” D laughed as we recalled our previous attempt.

“No, I know you’re right,I just feel bad for them” I took off the rose tinted glasses and remembered Ethans face; all red and blotchy while he tried to catch his breath. I remembered the panic attack I had. I remembered the broken promise to J.

“Look Ger, your sister will take J like she has done since then, Ethan can’t handle it anymore, imagine his meltdown now if we brought him? And as for Dee Dee, he’s 2, he still has no idea he is Irish!” He rubbed my shoulders… “I know you want to bring them and go as a family but really, is it worth it?”

“Yeah, I know. Ah I just thought we could try it this year…but you’re right it’s really not fair on Ethan” “Or you. You had a bad panic attack after it. It isn’t worth it..we can have the whole park to ourselves and not have to chase Ethan!” We both laughed.

So this Saint Patrick’s day we will bring Ethan and the toddler to the park, where both can run around and chase each other. Where we won’t have to be the ‘helicopter’ parents or have to apologise to children and parents alike for Ethan suddenly deciding to hit out.

J will no doubt get a day out with his aunty M, who has never forgotten to bring him to the parade.

But to those of you who are lucky enough to have a ‘typical’ family St.Patrick’s day, please enjoy it, even if your children are driving you nuts, there are plenty of us who wish we could have our kids driving us nuts for all things green!

And please move…move for the buggies, the strollers, the adaptive buggies and the wheelchairs…it’s hard enough wheeling those on any given day, imagine on a day when thousands line the streets?

Wishing you and yours a very Happy St.Patricks from our family who will be freely running wild in the local park with no audiences!

This was originally published over on  FamilyfriendlyHQ