We sat in our back garden, the sun shining high above us.
Each of us savouring our ice pops.
D and I watched as Ethan had finished his and was now on the hunt for “Ice cream”. 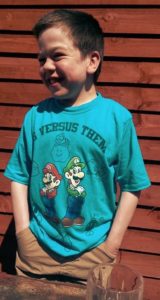 I handed him a big bowl of ice cream as I knew he’d want more; while a chorus of “That’s not fair, he has had his!” rang from his younger brothers, who were still licking the life out of their ice pops.
They were right of course, it wasn’t fair and it wasn’t something D or I would normally do.

“ICE CREAM” Ethan shouted as he waved the bowl in front of his brothers annoyed faces.

You know that saying; ice cream, you scream we all scream for ice cream? Well, I believe Ethan takes it far too literal…he cannot say ice cream without screaming!

“ICE CREAM “ he roared again as he waddled back into his sitting room. We have a dining room and sitting room in our home,double doors divide them. Ethan has the dining room as his sitting room, when really it is well on its way to becoming a safe room for him- a place where he can be left safely while I am cooking, cleaning, using the loo, you know all those things we must do day to day.

“Why did you give Ethan more than us mammy?” J asked.

“Because…” I stumbled. How do I explain this to an eleven year old boy who already is becoming more and more aware about what Hunter Syndrome plans to do to his older brother.

“Tomorrow” D thankfully jumped in, “Tomorrow Ethan has a thing called a swallow test, mammy and I think the doctor is going to tell us that Ethan can’t have thin liquids at all anymore” D paused waiting for J to digest that information.

“Ok, but what are thin liquids?” J shaded his eyes from the sun. We could see the concern all over his little face.

“But, but don’t we use thickener in Ethans drinks already?” J surprised us with his knowledge of Ethans thickener. We never really explained Ethans thickener or the reasons behind it to J; so he caught us a little off guard.

“Does that mean no more coco pops?” His face fell.

“We don’t know yet J. Daddy and I will know tomorrow for sure. But I am sure I can add thickener to his milk so I’d say coco pops are ok still” I patted his head and hoped this would be the end of our conversation.

“Why does Ethan need thickener mammy?”

I looked at D, shook my head. I swallowed hard.

“Ok bud, you know when you swallow a drink wrong and you cough?”
J nodded as D continued.

“So if it always goes down the wrong way, why is that bad?” He tilted his head waiting expectantly for his daddy to answer.

D sighed as he searched for an easy answer, one that would not scare the child.

“If it went down wrong all the time J” I paused, “it would go into Ethans lungs and he would get very sick”

“Would it kill him?” He asked without missing a beat, his eyes locked with mine.

My heart broke in that moment, my little boy asking if this is what could take his brother’s life.(Aspiration is the main worry here; Ethan could end up with pneumonia making it very hard for him to recover from)

“No J, he could just end up in hospital so to avoid that we use thickener” I lied.

“Oh ok. So tomorrow they will tell you what like?” He shrugged his shoulders, unsure of the reasoning behind this latest appointment.

“Well, we will see if Ethan’s swallow has gotten a small bit worse since last year is all” D shrugged his shoulders trying to make it sound a lot less worrying.

“Ah ok. And I don’t think it has. He doesn’t cough as much anymore with his juice or food so that’s a good sign” he stated not waiting for an answer as he ran off into Ethan.

The truth was we have been adding more thickener to Ethans juice lately and we knew deep down that there was indeed a decline in his swallow.

That was Ethan’s last time to have ice cream or ice pops,which was something D and I had anticipated.

The good news from the swallow test was that Ethan’s chew is as strong as ever so he can still enjoy his favourite foods.

We sat with J and explained that ice cream and pops can only be eaten when Ethan isn’t at home. J looked at us both, “Well obviously guys, I’m not a monster” we all laughed. “He is ok though yeah?” His eyes darted from D and I , we both nodded.

“He is still doing good J”

And now, now we are looking at freezing yoghurts and making smoothies something Ethan can still enjoy, so if anyone has tips and tricks please let me know!

This was originally published over on FamilyfriendlyHQ