We were living in rented accommodation, which we both hated. It wasn’t a bad house at all until you got to the North Pole , known in many homes as the kitchen. Having a fridge in there seemed pointless, as we used to draw straws in the dead of the Winter, in the hopes that the other one would have to make the trek to the North and turn the kettle on. Yep, it was that cold. Luckily,we had a dining room so we never had to actually stay in the North Pole to eat or drink tae.

Our middle child J, was to be christened in the local church and the cheapest option, at the time was to have our families and friends back to our house for a few nibbles and a few scoops.
The day before the christening , our friend Paul, J’s godfather to-be , drove down from the ‘big smoke’ to help us tidy and clean the house.
And here is what happens when you trust two men to tidy the house: 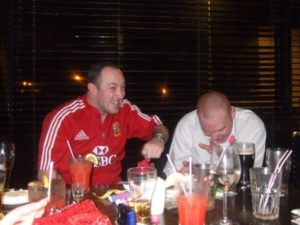 Ger asked Paul and I to tidy the North Pole , also known as the kitchen. And while she fed the baby , she asked us to tidy the dining room and sitting room. Actually, she had Paul and I tidy the whole house, come to think of it. All she had to do was the bathroom upstairs.
We had the place looking fantastic in about three to four hours.
Our next job was to go to the local cash and carry and get the ‘fuel’ for the christening.
This was the best job. We got some great deals on ‘Guinness’, ‘Heineken’, ‘Carlsberg’, ‘Bulmers’ and of course a few bottles of wine were thrown in to keep the mammys happy.
We came home to a quiet house; I miss those days.
Ger was sitting down watching T.V “Shh they are asleep” she covered her lips with her finger. We both nodded and quietly brought the fuel through to the North Pole. That was the great thing about that house, it kept your drinks cold regardless. We didn’t need to put them into our actual fridge.
Paul and I decided we deserved at least one can of Bulmers after all our hard work.
Ger came in and laughed as she saw Paul sitting on the slabs of drink handing me a can from in between his legs. “We done a good job, eh?” Paul smiled at her. She nodded.
The night wore on as the three of us stood in the not so freezing North Pole, chatting and laughing.(There may be some truth to that ol’ chestnut , that alcohol keeps ya warm) At about 3am we decided we probably should get some shut eye considering J’s christening was in 7 hours time . Ger reminded us both the only job we had tomorrow morning was to empty the fireplace. Simple really.
The alarm rang and Ger bolted into the room Paul was sleeping in “Get up, GET UP”
She couldn’t find me at first but I had decided in my drunken stupor to hop into the spare bed …the same spare bed Paul was in. She spotted me when Paul pointed at the foot of the bed. I was curled up enjoying a nice rest. She was convinced I was dodging the crying two month old baby that had invaded our bedroom; which of course wasn’t true (wink, wink)
“GET UP” she roared . She reminded us what we had to do while she got J and his 2 year old brother Ethan, ready for the christening. We were all hungover, there was no denying it.
Anyway the mass went grand and everyone came back to our house. It was then in that moment that Paul and I realised we had drunk all the Bulmers, some of the Carlsberg and …Ger pushed her way through the crowd in the dining room to grab Paul and I.
“Who cleaned the fireplace this morning?” She demanded.
Paul not knowing my darling wife as well as myself , proudly declared “Me Ger. And you’re very welcome” he went to give her a kiss on the cheek.
Through gritted teeth she responded “Get your ginger ass up that stairs and clean the once white sink. You Gobshite. Why didn’t you wash your hands at the kitchen sink?”
Paul laughed. “Yes boss.Sorry Ma’am” he made his way up the stairs armed with baby wipes. “One job this morning, that’s all you had , between ye!” She glared at me.
She did laugh eventually . But Christ does she get all bossy when we hold parties. 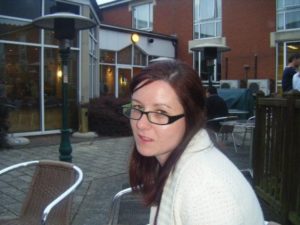 SHE SAID :-
Yes that pair sort of cleaned the house before running off like two giddy schoolboys to buy drink for the christening.
They came almost skipping in the door showing me the slabs of beer, cider and the five bottles of wine they bought. Proud as punch they admired their handy cleaning and shopping spree.
While they went off drink shopping, I had settled the baby, bathed the toddler ,hoovered the house ,scrubbed the bathroom, emptied the bins, cleaned the dishes , put away the laundry and got the kids outfits ready for the morning, along with my own outfit.
I didn’t see the point in telling them as they were so proud of their work.
We sat in the North Pole for a good few hours drinking and laughing. It was and still is actually my fondest memory of Paul ; Paul passed away a few years ago and we miss him, often.
The night ended for them two at 3am but my night didn’t. My night was spent feeding the baby and putting the toddler back into his bed each time he fell out. My head was banging all night and the next morning.
Dave did come to bed with me that night but at some point in between me feeding and changing the baby he crawled out and slept at the foot of Paul’s bed; he swears it was drink related …more like the fear of God he’d have to deal with the baby while sweating alcohol through his pores.
The next morning we were all hanging, ropey, clinging to the wreckage , whatever term you use, we were it..we were hung to bits over, but we managed to get through the mass.
One job I had given the two of them that morning. ONE JOB.
I ran up to the bathroom just to give it the once over as downstairs our house was quickly filling up.
I opened the door. I didn’t notice it at first. As always , I checked the toilet first, ‘cos lets be honest here ..men, eh?!
My eyes then landed on my once white porcelain sink which had now black streaks all around it, on the ground and inside it.
One job, you guys had …between you.
Paul did admit that it was him who washed his hands, he didn’t want to dry his hands off my white towels , so he shook them. “Dave used the baby wipes to clean up, I didn’t think that was what those wipes were for, ya know” he squealed like a baby pig without having to be probed.
“I really didn’t think the coal from the ol’ hands would stain the sink” he added, flashing his fingernails in my face, “Look how clean those babies are though, eh?”
I have no clue why he handled any coal. Nor do I know why either of them didn’t use the gloves bedside the fireplace. And I sure as shit have no idea why neither of them didn’t think to rinse the sink after they saw the state of it.
Paul being Paul took my annoyance as constructive criticism and ran up the stairs with the baby wipes to scrub the sink while I glared at my now, husband Dave .
“We didn’t see the gloves. And I didn’t actually do anything, it was Paul, who’s clearly trying to fix it now.” He smiled.
“That was the last of the feckin’ wipes” I handed Dave the car keys while our guests had a game of pass the baby around until he cries then give him to the mammy as soon as physically possible.
Paul came back down the stairs proudly declaring “Bathroom is scrubbed. Jaysus, myself and Dave were working all bleedin’ night and this morning keeping this place tidy for you all” he received a round of applause and a few fair- play- to- ya -Godfather pats on the back. 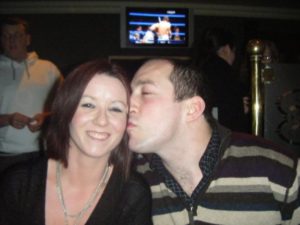 In the years that followed ; almost 13 of them, my darling husband and I now have a clear ..er…understanding of why gloves are beside our fireplace and what I actually do when he’s out getting the ‘party’ bits … I have also learned to relax (ish) a little (ish) when it comes to hosting parties in our home!