In 2015 our family had no idea that May 15th was MPS Awareness Day. We were lucky.

Most people have never heard of MPS (mucopolysaccharidosis). Why would they? It is not the rarest of diseases, but rare enough to be described as an ‘orphan disease’, affecting only 1 in 29,000 births if you take all the the variants together.

In July, aged three and a half, my youngest son was diagnosed with MPS II (Hunter Syndrome). We were lucky.

I’d had some concerns about him since his first few months; only little things at first, slight delays in sitting and walking, difficulty with weaning. But gradually, his behaviour seemed to be a bit more challenging than other children I knew and his language and understanding weren’t developing as well as they should. The pediatrician we were referred to already had some knowledge of MPS and related conditions, and ordered the relevant tests. I now know many other families aren’t nearly as lucky. When symptoms are put down to other problems – hearing loss, autism, crohn’s disease to name but a few – diagnosis can take years.

MPS patients experience problems in every part of their bodies due to the build up of waste sugars that are normally broken down by particular enzymes. But we are lucky.

Heart, lungs, joints, connective tissue are all affected. Apart from his development delay, my son has had very few effects so far. He now has a weekly enzyme replacement treatment that will help to limit the progress of the disease in his body. Not all MPS condiitons have this yet.

In October we found out that my son’s brain is affected too. But we are lucky.

Current enzyme treatments do not reach the brain. Without a way of halting the build up of waste, death usually happens in the teenage years. My son, though, has got onto a clinical trial that is working around this, so we have hope for the future. During the screening to assess whether he was suitable for the trial he scraped through the cognitive test with only one point to spare – if his diagnosis had come any later, I am convinced he would not have made it.

Our eldest son is unaffected. We are lucky.

Sometimes MPS is due to a spontaneous mistake on the DNA and this what happened in our case. But it can also be inherited from the parents (or in Hunter Syndrome, just from the mother), so given the length of time it takes to get a diagnosis, some families can have two or even three affected children before it is picked up.

In the first few months after diagnosis, when I was reeling from the shock of this devastating condition, I never thought I would be able to say how lucky we were. Please, please share this today, and perhaps you can help another family be lucky too.

What to look for in MPS 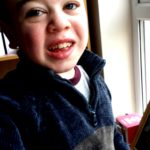 Within the mucopolysaccharides there are a few different conditions so the signs and symptoms aren’t the same for everyone affected. Here are some of the more common signs:

*normal or accelerated growth early on before it slows

*a particular ‘look’ (children with MPS I and II tend to have a wide nose and large forehead; MPS III children often have strong eyebrows)

*development delay/challenging behaviour (not in all types)

This is by no means a comprehensive list. For more information, go to the website for the MPS Society in your own country.

Written by Sally, who writes over on  http://www.hunterslife.co.uk.