I set goals in my head, never on paper. Paper makes it seem so final, at least in my head I can change these goals and not look over the past goals.

These goals are not big.

These goals are not accomplishments ; they are almost like a checklist.

A checklist of things which tells me how fast Ethans syndrome is progressing.

Ethan was always able to tell me, what my ‘other’ name was. He would tell me what daddys other name was too when asked.
For years, that was my goal, my checklist. For years it brought comfort, so what if he occasionally forgot his aunties names, his grandparents names, he knew our names and that was always a good ‘goal’ or a big tick beside that checklist.

“Daybit” He’d clap his hands before we got the chance to congratulate him.

“Good man Ethie” D would pull him closer for a squeeze.

We haven’t done that in over six months.

I tried at Chrsitmas time, but I had to stop as I could hear the agony in my own voice as I tried to coax “Jerdine” out of my child who was staring off into the distance.

I tell you, it is sad. It is espcially sad when you can hear your own pain. It is even sadder when your 11 year old asks “Why doesn’t Ethan say my name anymore mam?”

I try hard to answer that question but I can’t. I don’t want to be brutally honest with an eleven year old kid.

“Sometimes he forgets J, you keep saying it and he will try and say it again, I’m sure of it buddy”
But, I’m not sure. I’m not sure at all.

Sometimes he does come out with ‘gems’ – he hadn’t said my mothers name in years, last week he roared “MIMI” when he saw her…I could see the joy and pain etched in her face all at once.

My checklist changes…now if he can still say any form of mammy it’s ok, he’s ok and he is still doing ok.

He doesn’t say daddy anymore at all.

He likes to call people ‘Shrek’ and so we have decided it’s a compliment to be called ‘Shrek’ as he loves him dearly.

He calls me ‘mom’ but only when prompted.

I’ve changed the goals again, this time I just want him to be able to recognise us.

Give us some acknowledgement when he hasn’t seen us in a day.

I got upset yesterday and really there was no need…

But it brought all these feelings of what my boy can do right now which he wouldn’t be able to do in…God only knows…how long.

We were walking, well, Ethan was being pushed in his chair while I painfully held onto the dicatators handlebar of his bike. A, my wonderful friend, was happily pushing Ethans new wheels back from our stop at the shop. (I pushed Ethie down there, she insisted she push him back as the dictator was refusing to cycle despite demanding he needed his bike- pain in the ARSE- pushing Ethie was definitely the easier option)

“Hello guys” Ethan said to every single person who passed us.

Not one person acknowledged him.

That broke my heart.

I know they have no idea how much a simple response would mean and I know they may have or have not heard him…they may have been a million miles away in their own heads..I know all that and more… 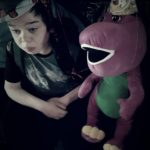