Yesterday is something I try not to linger over.

Sometimes, however, I can’t help but recall the days gone by. 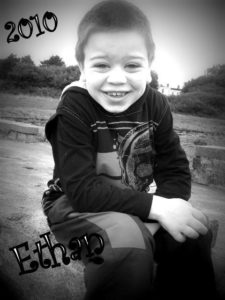 For us, autism is mixed in with Hunter syndrome. Hunter syndrome takes everything away from my son until he has nothing left. He has become a shell of his former self.

The Autism side of his syndrome, however, is different from the Autism that is now becoming “known” through TV shows and popular culture.

The Ethan of yesterday had to have certain things done in a certain way. I remember we used a picture board to show him how his day would go. We would have pictures of his breakfast, then the bath, and so on… This worked remarkably well until he changed the photos to things like his grandparents’ house instead of the doctor picture. I smile now when I think of the cleverness he showed us then…

We used to use “Lámh” signs to communicate with Ethan when his hearing began to decrease. He was very quick to sign the words he felt he needed. It really made us laugh that he chose which words to learn: pizza, hungry, drink, go away, leave me alone, give me, I want and, of course, I love you.

For years, our life with Ethan and his Autism was all about preparing and explaining. Keeping Ethan in the “loop” of what was going to happen or what was happening was what Autism was for us. We avoided overcrowded places and we could always spot a meltdown beginning. Ethan was excellent at regulating himself too, making our job with a meltdown a little bit more manageable. 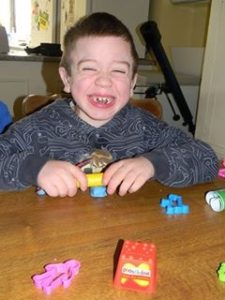 Slowly, as his syndrome took over, his version of Autism changed.

He became confused. He began to have meltdowns, especially if we were in public places. He experienced what we now know as a sensory overload.

His communication began to decline—slowly at first, and then quite rapidly late last year.

This is when Autism took a dark turn for our family.

Ethan became violent. He spent almost full days in a meltdown state. He rocked himself so hard on his chair that the chair toppled over.

Ethan was hospitalized late last year on a number of occasions due to his behaviour. We couldn’t cope. We didn’t know what was happening to our little boy who once used to laugh and sing his heart out to SpongeBob.

I don’t like to think of “yesterday” and how things have changed, because for us, the change is a decline. The change is unbelievably heartbreaking and the change is nothing like the Autism we see on TV.

His decline ensured his Autism would change. 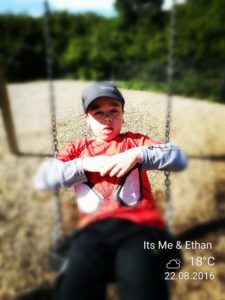 It took months of trying different drugs, a peg insertion and understanding that Ethan was never going to be the “Ethan” of yesterday ever again, to get us to where we are today—stable, with a different type of Autism.

He still needs routine, but now when that routine is out of sync or if he feels over-stimulated, he cannot regulate himself like he once did. He goes straight into a meltdown. Sometimes the meltdown doesn’t last long, mainly due to his medication balance, but other times it is violent, very violent, and nothing like the Autism you see on TV.

In the yesterdays of long ago, he could tell me he was sore, never straight out, but he’d show me and keep at me until I understood. I didn’t realise it then, but that took patience on his part, a level of patience I never really knew he had at the time.

Today, if he is sore, he lashes out.

I am in a world of guessing. The doctors are in this world of guessing, too. There are no straight answers for Ethan. We try a few different things and hope that something helps ease whatever has him upset.

The latest change to Ethan’s medication is Charlotte’s Web oil. Since beginning that oil, Ethan smiles, laughs and even tries to sing once more. He is vocal. He can engage, but somethings never change, Ethan will only engage when he’s in the mood to, which makes us laugh, as he has always been stubborn.

The meltdowns still come. They are less frequent and less violent, but they are still not easy to predict. 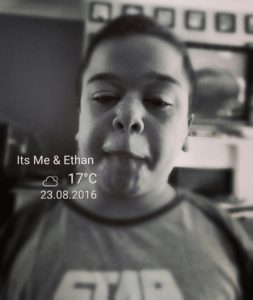 This was originally published on AutismAwareness


As a parent it’s very hard to read about Ethan’s decline. It must be incredibly hard on you as his mum. Hope you’ll find solutions which will help him. xx


Thanks Eva, yes it is hard of course, but it has to be done too. I think like you say, any parent can imagine how very hard it actually is. X


Oh lovely… I know exactly what you mean though. I know a few people with autism… each one of them is an individual and react in totally different ways to the same stimulus. I’m not going to say I’m sorry that Ethan is declining because you’re makng the most of what you have at the moment. Don’t think of yesterdays, don’t think of tomorrows, just concentrate on todays. 🙂 <3.


Gosh this is a hard read. I’m not a parent myself yet so cannot imagine how hard it is for you. I love his smile in the pictures.


Thank you for sharing, it’s great for understanding and awareness. I can’t inagine what it’s like to see your child violent and upset like that. It must be so upsetting for you all. Glad the oil is helping him at the moment though. Xx


Poor Ethan, and poor you. It can’t be easy for him being unable to make you understand, and as his Mum you will be desperate to. Sounds like you’re doing the best job of being there for him.


I can’t imagine how difficult it must be for you both. I hope the oil continues to have a positive effect.


I can’t imagine how hard it is day to day for you all but you’re doing amazing, his smiles in those photos says it all, as a mother I know that you get strength from god knows where and you do it, you do all that needs done because that’s your child and you’re a testament to that.


Wow… what an amazingly honest post. I can’t even how hard things must be sometimes but you’re amazing for raising awareness x