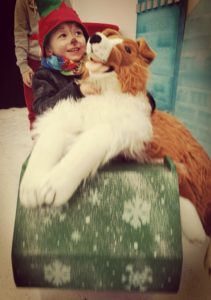 The main reason for us visiting the man in red so late in the season, was because Ethan could never understand why Santa didn’t arrive the next day at his house with all the presents.
Things change and Ethan has changed.
Ethan now doesn’t know that Santa brings presents but he still loves him so much.

We decided that this Christmas we would do our very best to make it very special for not only our boys but for us too. We were given the opportunity to visit Elf Town in Galway city; before it opened to the general public.
We excitedly packed the car, got out the ol’ Christmas jumpers and made our way to Market St. Galway.

Ethan hasn’t been doing too well lately; for those of you who don’t read my pieces regularly- Ethan has Hunter Syndrome and over the past few weeks Hunter syndrome has been changing his behaviours, making life very difficult for Ethan and us all right now. He is unpredictable and can be quite violent when having meltdowns.

We  were discussing  our plans if Ethan were to have a meltdown.  We decided ,D would take Ethan out of the venue and try to regulate him; failing that he would bring him for a spin in the car until he regulated, then join us again, failing that he’d just keep driving Ethan around until we had finished our visit.
We hoped Ethan would be able to enjoy the one thing in this world he still loves; SANTA.
We arrived with three happy boys and two very well prepared parents!
Dee,our threenager, galloped down the red carpet “It’s snowing mammy, look!”

I smiled as I watched him check if the white stuff on the ground was snow. “It is snow!” He exclaimed, which made us laugh, in all his three years he has never seen real snow, so we nodded and said “Wow!” Ah, who were we to burst his bubble, eh?

Ethan took a shine to the ‘Trissmasss trees which lined both sides of the wall leading into ‘Elf Town’. “Trissmasss” he roared as D wheeled him up and down the red carpet while we waited to be let into the magical place behind the Elf doors. 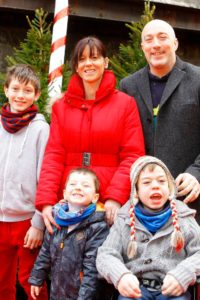 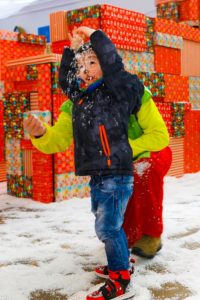 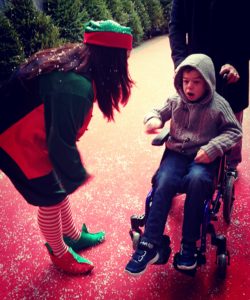 We were greeted by the ‘Snow Princess’. I say ‘we’ but really, she was all about the children. I watched her as she took her time to speak to each of our boys. She turned her attention to Ethan, I tried to warn her not to stand too close to Ethan (as we could see little warning signs that a meltdown may be on the way).

She smiled at me then back at Ethan.

She stretched out her hands and began using sign language to communicate with Ethan. D and I stood watching her with our mouths open. We were beyond touched. She bent down closer to him and used some basic ‘Lamh’ signs. He smiled at her ; we don’t know if he understood her but that didn’t matter; it was a beautiful little touch and one I feel needs to be mentioned. Thank you Snow Princess 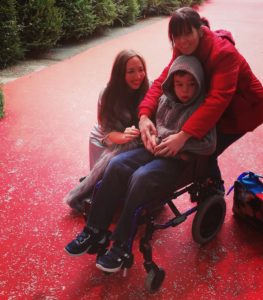 We had a few pictures taken and all was going well until the man in red showed up. Unfortunately, we had to go to plan B then plan C and then plan D when plan C failed.

Ethan and D had to leave;which left me feeling downhearted but looking at my toddler’s eyes and even my 11 year olds face, we had to continue on into Elf Town.

Elf Town is described as- ‘an interactive, magical journey through Christmas with a visit to Santa like no other’

As we followed the Elf through the Elf door, we were immediately transported to Elf Town. The Snow Princess was waiting to greet us and give us our ‘mission’.

Even my ‘I am too old to be here’ eleven year old, J, had to laugh when we were encouraged to throw snowballs at sleepy elves.

Making cookies with Mrs Claus was a lovely touch and one that Dee Dee got so involved with that he felt there was no need to meet Santa, since he was helping Mrs Claus make cookies …I had to coax him onto the next part of the adventure.

There is so much more than snowball fights and cookies but I don’t want to spoil it!

I use the word adventure because it is one. My toddler loved every second of it. He loved it so much so, that most of the Elves knew his name by the time we left.

We were in this magical Elf town for almost an hour , when we got word it was our turn to visit Santa. 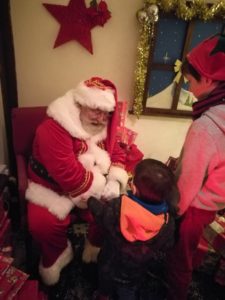 What can I tell you about Santa?

I’ve been visiting Santa’s for fourteen years as a parent and this Santa, was ‘thee’ Santa – I believe he may have even flown in from the North Pole.

Santa asked me after he spoke so wonderfully with Dee and J, about Ethan. I explained Ethan had had a bad meltdown and had to leave.

“Is he outside, can you ring his dad and get him here?” Santa asked.

I was touched by the genuine care in his voice.

“Thank you Santa but I think it was a bad meltdown, meaning he may be still going through it or it may have escalated to some violent behaviours” I smiled, hoping I didn’t just paint a terrible picture of my son.

“I see.I see.” He shook his head. “I am sorry. I am sorry I didn’t get to see him. Is there a day you can come back? I will come out to him and talk with him” he smiled at me.

My heart literally skipped a beat. I felt my eyes water.

“Thank you Santa. I might just do that” I returned his warm smile.

“I will come out to him, don’t queue , just send an email and I will know who you are. Merry Christmas” he stood up and we shook hands.

“And to you Santa, Merry Christmas” I nodded.

I left there feeling like there is a little bit of magic still around; especially in people. Even J couldn’t figure out how Santa knew his secret wish!

Well done Elf Town, you were all theatrical ,funny, warm and clearly caring, I personally enjoyed the ‘Grumpy’ Elf who wanted a Christmas Tree so badly that he had an axe with him!

Elf Town is also wheelchair friendly; I would say though if your child has issues like Ethan and is likely to meltdown, that there is a good bit of waiting before you can go onto the each stage of the adventure ; as there is a theme and a story with each section you visit. I would make contact with Elf Town if you are unsure that your child has that level of ability to understand and engage ; they are extremely approachable and very focuses on families, all different types of families.
Thank you Elf Town from all the Rentons x

This was originally published on FamilyfriendlyHQ