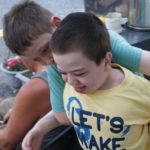 When your eldest son is diagnosed with a rare genetic life-limiting condition, there are conversations you thought you’d never have. Ever.

The obvious conversations are dark and morbid; normally these happen in the early hours of the morning after a rough few days with doctors and specialist; these conversations are between me and my husband; a mother and a father afraid of what our growing son’s future looks like.

Then the not so obvious conversations…

When Ethan is out in a public setting he sometimes finds it difficult; due to sensory issues, pain, mobility issues, crowds or simply he has a headache- these can all lead to an overload and cause him to have a meltdown. There are very little conversations had when this is happening, mainly I am given advice and opinions I haven’t asked for.

People tend to ask me about Ethan when he is happily running around and attempting to sing “Mickey Mouse” at the top of his lungs.

They ask because they see an older child trying to sing while a mother sits with him singing (badly) in an attempt to keep him engaged.

I understand that and I have no issue with anyone who wants to understand a child like Ethan; in fact I welcome it.

My conversations with these people are full of head tilts, empathy, compassion and often I get a prayer or candle lit for Ethan and us.

Every once in awhile, however, I will end up explaining why I have two more children.

How odd does that sound?

As a parent of any amount of children, have you ever thought you’d be asked why you have two children as opposed to one?!

No, neither did I. Until it started happening to me, a lot.

Ethan’s syndrome is genetic; which means after some testing, we learned it was a faulty gene I had passed onto him. (Simply speaking).

As parents, we pretty much all carry guilt when it comes to our children. And when you’re told that you gave your child an incurable and terminal condition, that guilt is sometimes unbearable.

So why did I have two more children?

That’s the question that some people are very comfortable asking me. I know why they ask it, but I still get a little taken aback by it. I honestly don’t expect them to ask it… but they do! I feel I must defend myself; explain to this stranger why I went on to have my other two boys.

J was 3 when we discovered that Ethan had Hunter syndrome. A syndrome, generally speaking, means you can see it. Armed with the knowledge that women carry the faulty gene and boys are the ones in (most) cases, who are affected by the gene, we knew J didn’t have the syndrome. 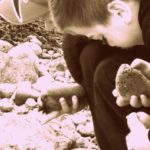 Nonetheless, we had him tested and he was given a clean bill of health. When we discovered 3 years ago that I was pregnant again, shock was probably the first reaction we both had.

We immediately went to the GP who took blood and sent it away to be tested. The first test that needed to be done was to determine whether this baby was a boy or a girl.

We looked at each other as the doctor informed us of how sorry he was that it was another boy. This meant that there was a 50% chance that this little growing bundle would have Hunter syndrome. Had it been a girl, there was a 25% chance she would be a carrier and that she would have had to face the reality of Hunter syndrome if she were to have a baby.

I am not an overly religious person, but I do believe in a God. I believe God gives me the strength I need from time to time to face the things no parent should have to.

We left the doctor and decided that if this baby had Hunter syndrome, we’d know this time how to get him everything he needed. We would get him on the current medical trials in England and start enzyme replacement therapy (ERT) before his first birthday. Though not a cure, ERT slows down the progression of the syndrome and is required once per week, every week.

Nine months felt like years. As my belly grew and my ankles swelled, I prayed and prayed to a God in the sky, who I was pretty sure wasn’t listening to me.

Eventually, it was time for me to have my baby. 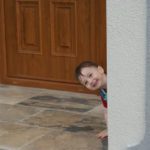 An emergency c-section convinced me that this little bundle had Hunters. Everyone in the delivery suite kept repeating that the baby was too big and all I could think was that Ethan was, too.

After D was born, I was afraid to hold him. I begged my husband to really look at him… his hands… his face and to see if he could spot early signs of Hunter syndrome.

I knew (logically) there was no way to tell at that age, without the proper testing, but I just thought that if anybody could spot the syndrome my husband or I would be able to.

I was not prepared to look at my baby until my husband did.

His little face was all squashed up. He was crying and he was huge (9lb 6oz !). “He wants to meet ya mammy” my husband said as he brought him over to me. I could hear the smile in his voice.

Taking my newborn son in my arms, I apologized to him and my husband. “Mammy got scared, but I love you so so much little man.” I prayed again as my baby boy slept on my chest.

Three weeks later, a phone call confirmed that our newest son was healthy.

To say we were relieved would be a huge understatement.

My old friend guilt quickly followed. Did this mean I didn’t love Ethan? That I couldn’t cope with another child having the same syndrome? Most parents love to see the likeness in their children, but I had prayed so hard that my newborn son would be like one brother and not the other. Did this mean I was a bad mother? What had I done? Why weren’t we more careful? How could I do this again?

When Ethan was diagnosed, we were told that we would need to think long and hard about having another sibling for J’s sake. We also learned that if every single person who wanted to conceive a baby had a genetic test, they would probably never go on to have that baby.

That is how “lucky” we all are when we have a healthy child .

If D had Hunters, too, I would have found that strength within me (we all have it) to have him in clinical trials ongoing in England and USA. The trial is a step closer to a cure.

We now have a brother for J who will live and grow into an adulthood. D has two very different big brothers who absolutely adore him and Ethan has two little brothers who will forever love him.

Ethan will always have Hunter Syndrome but with that comes a perspective that is unique to us, his family. He has taught us so very much in his (almost) 14 years. I have a feeling he has a lot more to teach us.

So why did I have two more children?

“I got lucky just like you did” – And that is the answer I normally give.

This was originally published on Parent.co