I sat still. I listened intently to the rhythm of his calm breathing. I watched as the machine beeped once again. His oxygen levels had dropped, but not to the point of worry, just dipped. I held my breath as the numbers on the machine began to rise again. 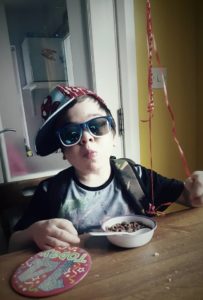 He let out a tiny snore. He was, this time, definitely asleep. I had made several attempts to leave throughout the night, but each time my chair creaked , he woke.

He had finally fallen asleep. I needed caffeine and I needed it quickly, if I were to make another 24 hours without sleep.
I heard the nurses outside; they were getting ready to do the ‘hand over’ – night nurses telling the day nurses how the night went. They were organising charts and medicine for the ward while waiting for the shift change.

I got up from the chair. I stretched. Rubbed my eyes and gently took my coat.
Slowly I made my way to the squeakiest door in the whole ward and began to open it, I scrunched up my face, said a quick prayer and glanced at my little boy as I turned the handle down. He didn’t even move.
I stood outside the door and once again tried to quietly (as the damn door would allow) close it.

“He has only fallen asleep in the last half hour, unless you ladies can hook me up to an IV of caffeine , I have to go and get a cup” I smiled, hoping I wouldn’t hear the words “Oh we are just getting stuff together for the handover “
They both smiled.
I even stopped the cleaning lady and warned her room 5 was out of bounds, she smiled and nodded at me as I left the metabolic ward and headed to the canteen, hoping it was open.

I walked along the narrow corridors then finally out to the main part of the slowly coming to life hospital. I watched as students and nurses began their day, while mine had yet to end.
I yawned and nearly fell down the final flight of stairs leading to the canteen.

She was standing pouring milk into jugs. She had the radio on and I could smell coffee brewing.

“Excuse me, but would I be able to get a coffee?” I whispered.
She glanced up at me. She narrowed her eyebrows and shrugged “We aren’t open”, without missing a beat she added “are you a parent here?”

I nodded, hopeful that this may mean I could somehow be given a pass and get a coffee.

“And why, my dear are you down here, should you not be with your child?” Her face was expressionless.

I opened my mouth, but words failed me.

“Ah Jesus, love, I am only bleedin’ messin’” she came closer to me and rubbed my arm.

I nodded, feeling relieved and a little guilty.

“Ah love, of course you can have a coffee, come on in here” she lead the way into the canteen.

“Ah pet, I was only joking are you alrigh’?” She began to hand me a paper cup.

It was only then I noticed my hand was shaking.

“Ah come here love” she stood with her arms out.

I walked to her and let her embrace me. She rubbed my back and reassured me that it was ok, that Temple Street hospital is the best place to be when you’ve a sick child.

I cried while I told her my reasons for being here.

She nodded and listened, rubbing my arm the whole time.

“He will be ok love, you’ve got to believe it”

I tried to pay her for the coffee, “Will ya bleedin’ stop it, I am here every morning around this time, you come back down to me and I’ll give ya your coffee and maybe a banana too” she smiled.

I thanked her, not just for the coffee but for the hug and the kindness she had shown me.

“What’s your name?” She called after me as I left the canteen.

“Geraldine” I answered and in my sleep deprived , broken heartedness, I never asked her, hers.

I wish ,as I returned each day for a week, that I spotted her again, but I didn’t.

I wish I could tell her that she was right ; Temple Street is the best place to be when your child is sick.

I wish I was able to tell her that she showed me such love , compassion and understanding in the simplest of forms; a coffee, a hug and a listening ear.

I wish she knew that she made my morning brighter.

I wish I could tell her that she is what makes Temple Street great; it’s not all about brilliant doctors and nurses.

And I wished I had asked her her name too.

Thank you so much to the kind ‘mammy’ who works very early, in the canteen in Temple Street hospital— you helped me far more than you know .

(PS, Thanks to the power of social media, I now know, this lady is Nora!! Her daughter read this piece and made contact. THANK YOU Nora xx)

This was originally published on FamilyfreindlyHQ