Attention Deficit Hyperactivity Disorder (ADHD) affects children & teens and can continue into adulthood. ADHD is the most commonly diagnosed mental disorder of children.

Children with ADHD may be hyperactive and unable to control their impulses, or they may have trouble paying attention.

It is a disorder in which the brain’s neurotransmitter chemicals, noradrenalin and dopamine do not work properly.

It is a disorder that, without proper identification, treatment and management, can have serious and long lasting consequences and/or complications for an individual.

It is important to note that ADHD is a very treatable condition. If diagnosed and properly treated, people with ADHD can reach their potential and lead happy, successful lives.

I don’t like writing about ADHD, mainly because of all the backlash that comes with ADHD. 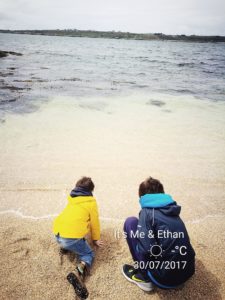 I don’t like talking about ADHD either, for the same reasons.

I always and I mean always have to debate ADHD as soon as it comes out of my mouth.

Let me share with you what ADHD means to me, my family and most importantly my young son.

ADHD takes over when his eyes won’t shut and let him sleep,

ADHD takes over when his brain refuses to quieten,

ADHD takes over when an idea gets stuck on a loop,

ADHD takes over when this idea has to become a reality,

ADHD encourages those little ideas where safety isn’t a priority,

ADHD encourages one to speak regardless of interrupting a private conversation,

ADHD encourages those little feet to run, those hands to fidget too,

ADHD encourages those little white lies which we can spot on top of that small nose.

ADHD brings out the brightness, loudness and energy,

ADHD brings out the spontaneity, we all wish we had,

ADHD brings out forgiveness, the charm and honesty (often brutal!) too,

ADHD brings out the adventurer, we all wish we could be.

ADHD makes up a part of my son; that’s a statement not a question to be debated.

ADHD is very real to our family.

ADHD can cause arguments, destructive behaviour and often unreasonable reasoning.

ADHD is indeed very real when our child can’t concentrate on what the teacher is saying because they have used long sentences or he has been sitting too long, or there’s a light flickering outside…

ADHD makes up a part of my wonderful, smart, funny, goofball son; that’s a statement not a question which is open to debate.


I’ll be honest and say I didn’t understand ADHD enough until I read this post. It is interesting to read about the different aspects to it, both good and bad. And I’m sorry it causes you to have to debate it and that you experience backlash when you do. As you’ve said, it shouldn’t and you shouldn’t need to debate it every time you speak of it x


Thanks Cath I appreciate it . Yes ADHD certainly starts a debate …I don’t engage anymore , it’s just not worth it ! Thanks for reading x


Absolutely Helen, thanks so much!


What a beautiful written, honest post. I haven’t had any experiance of ADHD personally but I do believe it’s something that is misunderstood and we need to be more understanding of.


Exactly Ami, I think it is very misunderstood. Thanks so much for reading x


So important to raise awareness. As a teacher I had a number of children with ADHD in class & due to all the funding cuts, outside support was so limited. It would drive me mad when people would call them ‘naughty’! x


Exactly, naughty is such a horrible word to use for some of the behaviours our kiddies cannot help. Budget cutting at its finest, eh? Thanks so much for reading x


I think it’s such a shame that some people still argue about this condition. Thanks for raising awareness and sharing your thoughts


Thank you Anosa for reading and sharing your own thoughts, which I agree with, it sure is a shame that people still debate its existence !


What a wonderful piece. Heartbreaking in places but such a lovely tribute to your beautiful son. x


This is a great post for helping people to understand. I didn’t know much about ADHD before but feel quite enlightened now, thank you.